With the works in the vineyards controlled and on time, we decided to join a group of three other Portuguese winemakers and cross the Atlantic towards the United States. The four of us, Julia Kemper, Vitor Mendes from Quinta de Gomariz, Pedro Pintão from Poças and me, were leaded by Ryan Opaz from Vrazon, a native American, living in Portugal since three months ago and passionate about social media, wine and, he says, our own country. Our destination? The Midwest. Name of the mission? The first Portuguese Wine Invasion.

From Portugal we took Barcelos’ rosters, maps, t-shirts and a lot of motivation. All of us already have distribution of the wines in the US, but not in the states we were visiting. A big white van was the vehicle of the invasion, packed with all our bags and wines to start a noisy invasion. All we wanted was that the Americans realize Portugal was invading them, wine invading of course. We started in Minneapolis, Minnesota, on the 30th of May and finished in Madison, Wisconsin, on June 5th. During this period, we stopped also in Kansas City, St. Louis, Indianapolis and Chicago. All our adventures were social documented on the blog of the Portuguese Wine Invasion. Check it out! 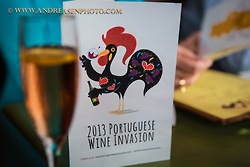 As the time passed, I was realizing that despite being able to generate a lot of interest in our “invasion”, people hardly remembered the name of our wines. They were going back home thinking about the experience they had meeting Portuguese people and wines, but not really having in mind a specific brand. But was our goal to promote our individual wines or to promote the country? Right, we were there to talk about Portugal, and promoting the country, we were promoting all Portuguese wine, and doing that we were in the end promoting our wines. We were trying to recruit new elements to become fans of Portugal. If some of them next time they visit a wine shop are going to ask for Portuguese wines , then we have accomplished our mission. We all the four producers want and expect to sell more wine in the US, otherwise we couldn’t finance a second invasion. But we learnt that if we join our efforts and talk about Portugal, eventually, people will ask for our wines.