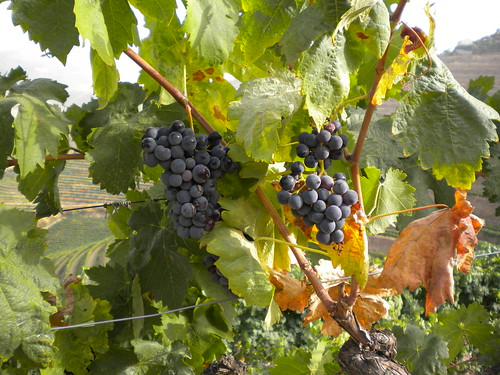 Following a kind of tradition that we started in 2007, the first maturity control of the grapes are carried out on August 10th. The chosen place is always Quinta Vale d’Agodinho, which we divide in 4 parts: top entrance; house; orange trees and northern water containers. At 6pm yesterday, there I was, with two more people helping me in this herculean effort. With a temperature of 43º, my sister in the beach, the sun on my back and the river down in the valley but not at an approachable distance, I wondered why I decided to live in the Douro. Not even the grapes were of any help to hydrate me, as they are still unripe and acid. Some berries are still green, specially Tinto Cão and Sousão. And that was the big conclusion: maturity is late. As sugar levels are still low, with an average potential alcohol of 10.05%, grapes need at least five more weeks in the vines. We should not start harvesting in Quinta Vale d’Agodinho before September 20th.

The biggest contribution for this delay in the maturation comes from the very cold Winter we had. Budbreak and flowering both came later than usual, and so will the harvest. Another interesting thing I noticed that shows pretty well how the Winter and Spring were in terms of rainfall, was the vigor of the shooting. The high levels of humidity in the soil helped the vines to grow more branches and leaves than they normally do. All these shooting has been controlled and cut to focus the vine in the maturation of what is really important: the grapes.

And how was the weather in the past weeks? These two last weeks have been extremely hot and dry, which is not good for the vines and neither for the grapes. In some cases, when bunches are not protected by leaves, sun can burn the skin of the berries. I’ve already found some signs of sunburned grapes.

I hope temperatures go down as soon as possible, specially overnight and I wish we have 2 days of rain from now until 2 weeks before the harvest starts, which would be of good help for the quality of the wines.