Climate change: how it is going to affect viticulture in the Douro Valley 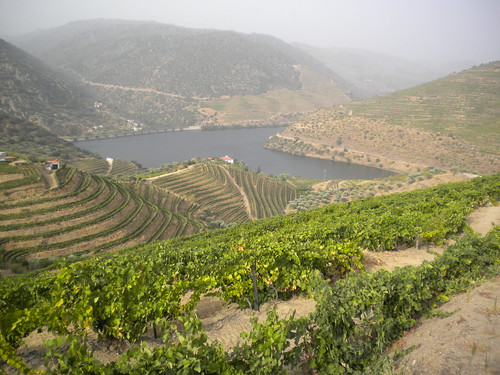 Editor’s note: One of these days, I was going with Luiz Alberto from Porto to the Douro when we started talking about the eruption of the Icelandic vulcano Eyjafjallajökull in April last year and its effects on grapes ripening in the Douro. Other discussions followed. Suddenly, I challenged Luiz to write a paper about how climate change is going to affect the viticulture in the Douro. Here are Luiz’s thoughts, originally posted on his blog, My Wine Studies. It’s a long one, but very worth to read. Oscar

When dealing with climate change, natural climate variations should never be discarded. There is  climate variability, which is the change in the weather behavior at a certain location from time to time. However, climate change due to human   activities is happening and will have a large impact and many implications everywhere on the planet. The worlds major wine-producing countries  Italy, France, Spain, USA and Australia  are all at risk. Vines are extremely sensitive   to the numerous changes associated with climate change, but this paper will have the subject under a microscope and only discuss how its going to affect viticulture in the Douro Valley (and it assumes a business as usual   approach). This discussion is about what needs to be done in a scenario where the temperatures are higher (with an increase in frequency of extremely hot days), the droughts are more severe, and theres increased surface   evaporation. Efforts need to be made to keep viticulture and winemaking viable and profitable in this traditional wine region.

Temperature change can have dramatic influence on grapevines and, in general, the solution for the higher temperatures has been simplified: Go higher (either in altitude or in latitude) and the sweet spot for a certain grape variety will be re-stored. This rule certainly applies to the Douro   Valley, where the altitude of the vineyards can vary from about 300 feet ASL to almost 3,000 feet. The Douro has another important advantage over other wine regions:  Exposition to the sun is certainly another remedy for the problems that will be faced. A possible solution is abandoning the south facing vineyards that are too hot  (or try some dramatic canopy management changes including shading) and replant on the cooler, north facing slopes. The Valley offers 360° of exposition, but early adaptation to the new scenario is going to be key to a successful transition (and such a transition requiring new plantings will take years). Most of the new vineyards in the Douro Superior  (where the rainfall level is 1/3 of the Baixo-Corgo) are already north facing.  For example, the famous vineyards Quinta de Vargellas and Vesúvio are both north facing.

In the wine industry things move really slowly (it takes a few years for a vine to start producing wine and many more before it starts making good wine), people have to start acting now. The rest of the world will be also responding to climate change. The efficiency of the   adaptation is crucial.  A region as traditional as the Douro needs to adapt quick and show flexibility. Some laws will become old and inappropriate. These laws will make no sense under the new environmental conditions and need to  be eliminated. For instance, there are significant physiological and morphological differences among Vitis vinifera varieties and the ones that are allowed (or recommended) to be planted need to be re-evaluated in over time. There are hundreds of grape varieties in Portugal alone. The ones that are less sensitive to hydric stress and high temperatures need to be favored against the ones that dont perform as well under these conditions (such as Tinta Barroca ou Tinta Francisca. However, to mitigate  this issue, its also possible to use rootstocks that are  drought resistant (relatively speaking) and, because of that,  R110 is becoming more and more popular in the Douro. It was already used in the past (along with 1103P), but lately more and more producers want drought tolerant rootstocks, rather quantity or quality focused rootstocks.

Higher temperatures, in an already warm region like the Douro, will inevitably have some negative consequences in the   short term (different from a region, like the Mosel for  example, where the  extra heat is helping to bring a large  number of great vintages in the last  few decades): Fall  in values of total acidity (especially malic acid) and increase in sugar content (which in return will produce  more alcoholic wines). Harvesting earlier is a possibility to minimize these problems, but the result will be wines without complete phenolic maturity, with harsh and green   tannins. Again, other varieties (or clones of some of the existing varieties) and rootstocks with better resistance to droughts and higher temperatures will have to be   planted. These new plantings will better perform under these even warmer conditions.  Early-ripening grape varieties that are very susceptible to hydric stress may have serious problems being grown in some parts of the region. Canopy management could play a role, with less sunlight and more shading of fruit. However, increasing canopy size also means more dehydration, so this is really a double-edged sword solution to the problem.

But temperature is not the only direct effect of climate change:

The authorities and the people of Douro Valley need a coordinated effort to mitigate these adverse conditions. As Pancho Campo MW said  Technology will have to be developed and adapted to confront   the consequences and impacts of climate change, looking for more efficient energy systems, reducing considerably the emissions of greenhouse gases,  designing new forms of  fuels, promoting recycling, reforestation, etc. The   international industry must invest in adaptation to new technologies that can help mitigate the effects of climate change. From the point of view of economy, new types of incentives, subsidies and tax deductions are to be   implemented, with economists, scientists and politicians working under a well coordinated effort. Profitability ultimately drives the wine industry (or any industry for that matter), but showing that a winery is doing its part on   mitigation is essential as well. Consumers worldwide will be watching which policies are being implemented to deal with carbon dioxide emissions. The expectations are high and failure to meet them may cause a negative image for   the entire region. Not only theres need to find solutions to adapt to the unfavorable conditions that the future may bring, but also to make every possible effort to choose the pathways that will lead to less drastic consequences.

By Luiz Alberto, from My Wine Studies