Harvest at the Douro by Monique de Jager Editor’s note: The article you find underneath was written by a friend, Monique de Jager, a friend from Holland that spent a week in the Douro last September, for the harvest. I challenged Monique to share her experience and here it is. If you dare to come over next September let us know. Oscar

Harvest time at the Douro; a wonderful but tough period of the year for all the wineries. Eugène and me (Monique) were there in September 2011.

My brother has been a Port lover for the last three years. Last year he met Oscar in Holland in Nieuwegein at a wine tasting evening. Oscar invited Eugène to come to the winery to pick some grapes during the harvest. Well, Eugene started to make his trip to the Douro and almost one year later, just a few weeks before leaving to Portugal, he invited me. I had to arrange everything with my husband (Ronald) and kids (Jelle and Sietse) and at my work too. All worked out positively. I was the lucky one that had the opportunity to go to the Douro with my brother Eugène. After a full day of work in the hospital – I am a nurse – we left Amsterdam by plane at night and arrived to Porto just in time to pick up our Clio at the car rental of the airport.  After one short night at the Ibis Hotel we went to Oporto for a tasting of some very nice Port Wines: Old Tawny Ports and Vintage Port. I write it all in capitals because of the respect for the Port Wine of the Douro.

We started the trip to Quevedos winery in S. Joao da Pesqueira; our final destination of the Douro trip. After two and a half hours driving, it was about 6pm when we arrived at the winery. We met Oscar (junior) and Claudia, his sister. It was a warm welcome. Oscar showed us the winery in great lines and let us try one of his Port Wines.  We saw that it was a very busy time. Harvest time is the most intensive time of the year. And still than, the family was so open, friendly and they had always time to show parts of the winery and explain how the process of the grapes was going.  We got to know the parents of Oscar and Claudia too. We even were invited for dinner on the Thursday of our stay. It was so nice to meet Mr and Mrs Quevedo. We got to know this very hard working family.  One of the friends we met at the reunion weekend told us about Oscar. After finishing studies, Oscar worked at a bank. He made a change in his career when his grandfather died. Oscar wanted to save the winery and started working for the Quevedo Winery. He, Oscar, changed in a positive way. He found the job for his life. He became a happier guy than ever.  Somewhere in the evening Oscar brought us to the house in Valongo dos Azeites. It was amazing to see such a beautiful house in such a beautiful surrounding. We were really surprised. The house belongs to the family. It was just restored, we could still smell the paint. 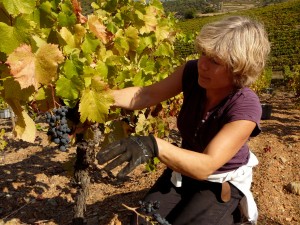 The next day we had to be at the winery at 7:00 am. We got a pair of scissors to pick the grapes. And that was it, that was the tool, and a hat for the sun and the right working clothes. We had to work at rocky places also on hilling tops. It was work where you get some more condition. Its like going to the gym and working your muscles. Well, we went with our Clio to the house of the parents of Oscar. On our way we saw a beautiful sunrise.  There we met the father of Oscar, Mr Quevedo, Oscar Quevedo. With his jeep / pick-up truck and some other people from Romania and Bulgaria we drove to the vineyard. It was a very rocky, narrow and windy off the road. We enjoyed the view so much. In the beginning, it was around 7:30 am, it was very chilly in the vine raw up the hill. Then, when the sun rose and the warmth of the sun rays started to do their work, it became in all of a sudden very warm. It was a big moment to pick up the first grapes. This was for we came for. Picking grapes, harvesting at Quevedos winery. It gave us a big kick. It also was very nice to work with people from abroad. Their goal was very different of our goal. Two separate worlds. It made me think about the differences in the world too. We are very lucky with the way we live here in Holland and that we have the opportunity to visit Portugal in the way we did in this harvest trip.

The funniest thing was that when Eugène started cutting the very first stem of the very first bunch of grapes, he cut his finger; it started bleeding, no it was not the liquid of the red grapes, it was really blood. I put some homemade bandage around his finger and he has to do with it because nobody has any bandage in his/her pocket.  In the afternoon it happened to me… Luckily, it was also the last time we cut ourselves because we decided to buy some garden gloves in the afternoon at the store in the main street of S. Joao da Pesqueira. Because I loved the gloves and the scissors I bought a few sets for my friends and myself to use in Holland.  At about 9.30 am weve had a half a hour rest. Oscar senior and junior brought us to the village where they served a good cup of coffee and very good pastries. Portugal is famous for its pastrys! I can confirm you now it is true!  Coming back to the vineyard we started the second part of the day picking grapes. When one parcel of the vineyard was finished, Oscar drove us to another part of the quinta it was really rocky… now and then a hole…. Suddenly we got stuck and the truck almost turned over. Luckily there were strong men who got the car on its four wheels again. 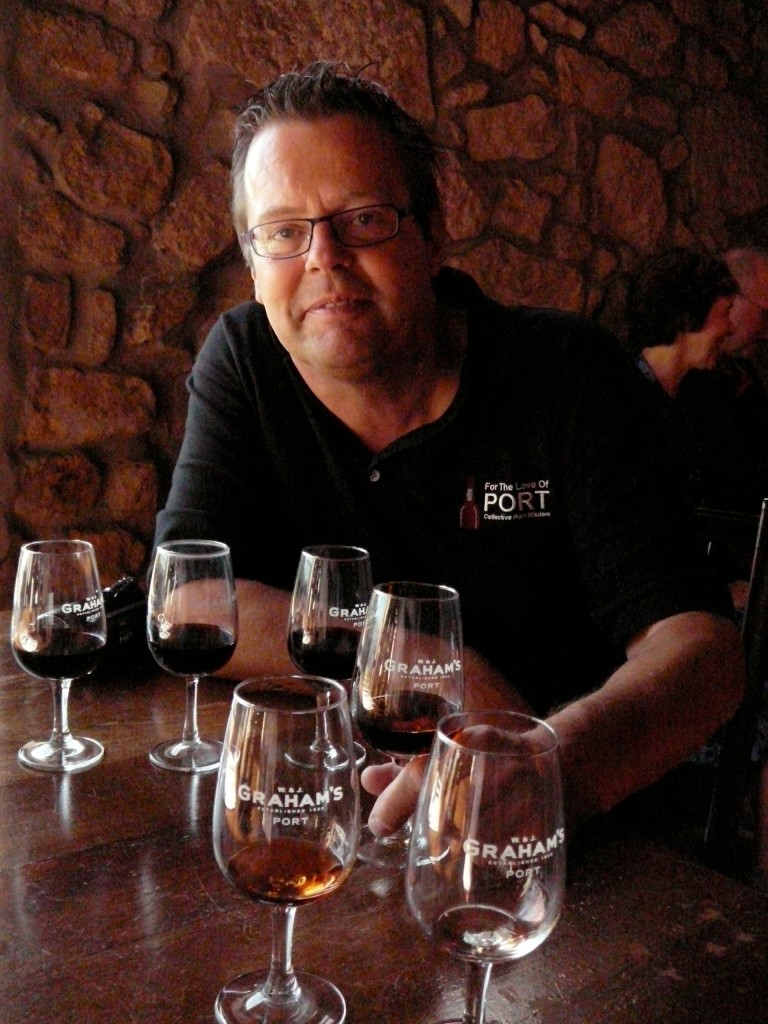 At 1.00 – 2.00 pm we had lunch and after the lunch we took a big nap at the top of the hill of the vineyard. From 2.00 – 5.00 pm we had the last shift of grape-picking. When we finished at 5pm, it was time for the pickers to rest and get their body strong enough for the next day, for the family Quevedo it was different: the big work started and went on and on and on, even by night they have to control the process of the grapes to finally make the authentic  Port Wine of the Douro.    The most wonderful things will be made here, at the winery by Claudia. Of course no Port Wine without joint work of Oscar junior, Oscar senior. And never forget Mrs. Quevedo who is doing all the invisible  things around this hardworking family.  For now we say thank you for the wonderful time at your place, your hospitality and kindness. We loved to pick the grapes but we even love more the taste of Port Wine! In Holland, Quevedo Port Wine is at the distance of a two-minut walk of a Jumbo Supermarket. This way, I always stay close to Quevedos Port Wine and keep fresh in my memory a wonderful harvest time at the Douro with the family Quevedo.