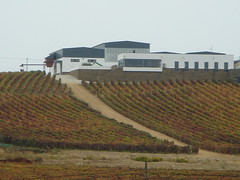 In 1991 Quevedo was created as a brand of Port, following the passionate dedication of the previous generations. The grand parents of our parents had already been dedicated to the production of wine. The vineyards of our mother’s family, the Morais Fernandes, were located in Linhares de Ansiães, in the Carrazeda district, on the right bank of the Douro River. The main property of the family is Quinta da Alegria, crossed by the Douro railroad and with a station with the same name as the vineyard, Alegria. From our father’s, the production of the family Costa was located in Valongo dos Azeites, in S. João da Pesqueira, place known not just for the olive oil (azeite) which gives the name but also for the fresh flavour of its dry white wine.

At the end of the 70’s, Beatriz Morais Fernandes and Óscar Quevedo decided to live and work in S. João Pesqueira: Beatriz was a doctor in the Health Care Centre and Óscar was a lawyer and administrator of the Registry Office. Then, keeping a close contact with the growing and production of wine, they fell in love with these arts. During the 80’s they increased the production area and at the beginning of the 90’s they built the winery which is currently the headquarters of Quevedo. So, in the middle 90’s the family did not only produce but also bottled and marketed its wines. And it did not stop here; it also started to open its doors to those who wanted to know and to discover the wines by the Quevedo’s perspective.

In order to assure the best grapes year after year, we started to extend our vineyards up to the 100 ha, as we currently cultivate in the rough sub-regions of Cima-Corgo and Douro-Superior, where the Douro traditional varieties prevail; and to honour its incomparable taste, we enlarged our winery and wine cellar, under the control of the winemaker of the family, Cláudia.

The results are wines with the flavour of the schist where they were born, with the sun that matured them and with the love with which they were cared.

With over a century of a dedicated life to the wine, Quevedo is much more than a brand, is a family who lives for the wine and is proud to offer to the world the best that Douro has.