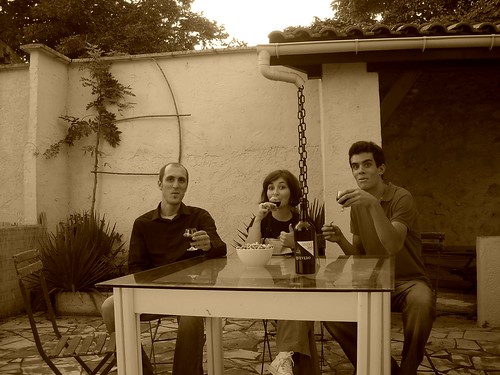 Hello, I’m back; I have been in France for the last couple of weeks, and I can say that this trip was the beginning of a new relationship with wine and the life that it represents.

I’ve been for three days in Bordeaux, region that is considered by many – in fact, many don’t know Douro yet – as the cradle of the world’s best wines.

There I stayed at two wine lovers, and offered them the best Quevedo; I had the chance of studying thoroughly the french tastes, and reached the conclusion that, based on a non representative but highly enthusiastic sample of tasters, Vintage Quevedo 2005 is the best Port Wine in the world.

At least in the world known by Pamela and Denis, my hosts in Cubnezais, a beautiful village near Bordeaux. And their world is not that small, as they knew Port brands like Cruz, Sandeman and Offley; I believe that none of them had sent an ambassador to their place, but I am confident that this fact did not interfere with their opinion.

With them I learnt how friendship can start in a glass of Port; even with ice sunk in the sacred Vintage, even accompanied by ‘cacahuetes’ instead of cheese or patês, even before dinner and not as a digestive. As one of us says, it is as good to anticipate successes as to commemorate them.

In the next weeks I’ll tell you about a bike tour in Saint Emilion and some wine tastings in Brittany.

Till then, um abraço do