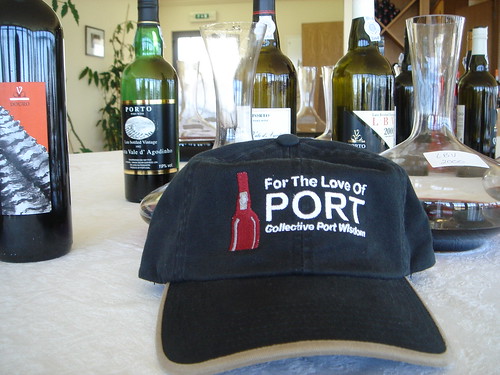 Editor’s note: early May we had the pleasure to receive the visit of Mr. Roy Hersh, from For the Love of Port, during the Fortification Tour 2009. On Mr. Hersh’s newsletter of June 2009, which is always one of the best sources of information about Port, he comments on our recent launch Quevedo Rosé. Please read below his notes. Oscar

From what I have been told, this wine is now available in Portugal, The Netherlands, Denmark and Germany. I tried it while visiting the Quevedo family and it is a very sweet version and especially if mixed in a Port Tonic this should be a great success. This was the third Port producer’s Pink/Rose Port I’ve tried so far.

In a future newsletter, I will recount our recent visit to Quevedo during the 2009 Fortification Tour in May. We had a really terrific time at their property, which to put this in perspective, is very close to Quinta de Vargellas in the Douro Superior. The wines and especially their Ports, from LBVs dating back to 1968, a few Vintage Ports, a very solid 10 year old Tawny and a handful of Colheitas too, were a tremendous and pleasant surprise!

Not prepared to release my tasting note yet, but I must say that the 2007 Quevedo Vintage Port that I had that afternoon, as well as the bottle I tasted blind over three days, was mighty impressive. This is a Port shipper to keep an eye on. I can only hope that they will find an importer in the USA! Speaking of which, I believe they are coming over to America next month to partake in the American Wine Bloggers Conference. If you have not visited the Quevedo blog as of yet, go check it out.

Last and definitely not least: There is more great news from the Quevedo family. They will be releasing their first Colheitas to the aforementioned marketplaces, which will include the 1992, 1994 and 1995 vintage Colheitas. We tried others as well, going back to 1968, but that is a story for another day. My favorite of the new releases was the 1994 which was wonderful for such a youngster!