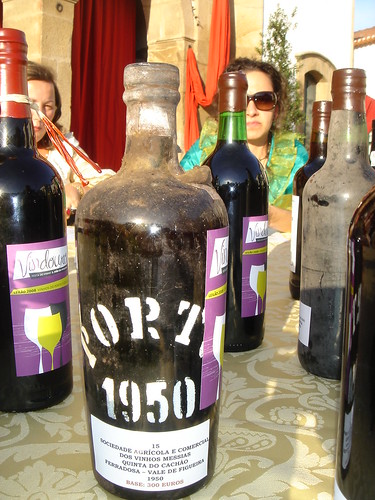 Port wine auctions are one of the traditions of Vindouro, the wine fair which takes place every year the first days of September in S. João da Pesqueira, the heart of the Douro. I can easily remember, as it was yesterday, the cloister of the Palácio de Sidrô or the municipal theater full of wine lovers eager to get a good bargain. These memories are from when I was 10 to 15 years old. I am now 25 years old, so the port wine auction in my town is a wonderful part of my youth.

This year, the ritual started the 6th of September in the middle of the Praça da República, the center of S. João da Pesqueira, with a crowd of over 400 people and 16 bottles of Port.

The first wine to be auctioned was a Colheita 1989 from Adega Cooperativa de S. João da Pesqueira, the cooperative winery the city which represents the small grape growers of the biggest Port Wine district. At the end of the 80’s, and beginning of the 90’s, this winery brought to the market some excellent wines, mainly Douro table wines like the Reserva 1985 or the Reserva 1989, which my father still has in his cellar. Unfortunately, lately it’s been loosing influence and prestige in the Douro wine business.

The photo shows the table with all of the wines auctioned, the respective Reserve prices and the highest bids. I personally think that some of the wines were sold quite cheap, as can be expected in an auction in the middle of a wine region with very few participants not related with the port wine production. Unless a big advertisement campaign took place in the next years, this would be a really good place to buy quite cheap wine from small and little known producers.

The auction ended with a nice surprise. A Colheita 1898 from a small producer was auctioned, with the revenue reverting to the Geriatric Hospital of the town. At this very moment, it’s strange to know how influential Port has historically been for my town. I truly hope it never changes. The Reserve price was 520 EUR and the highest bid 1,000 EUR.

I had the opportunity to buy one bottle in this auction. Leave a comment and I will let you know which Port Wine I brought home!