Treading Grapes in the Lagar – Traditional Vinification in the Douro 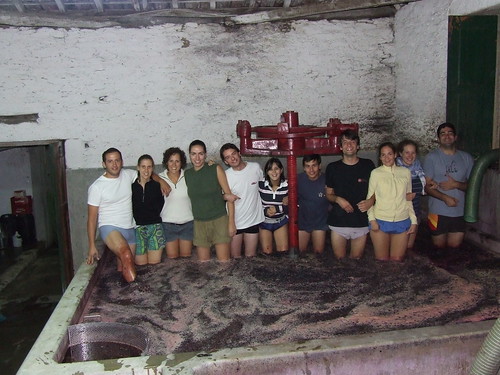 Harvest in the Douro is synonym of treading grapes in the lagar. As João Ribeiro has explained, the last week-end of September was time to meet our friends and have fun while harvesting grapes and help to make wines in Quevedo! On Saturday night we went to Quinta das Aranhas (in Ervedosa do Douro), an old and traditional winery in the right bank of Rio Torto, property of a colleague and friend of the family, Sebastião Mesquita. There, we where received with an amazing 1974 Colheita of his family. Then we went to the old lagar where a huge cement container full of grapes was awaiting for us.

It was the second time I trod grapes in a lagar. The first time was last year, with the same friends but in Quinta de Ventozelo. Some people prefer the wines from this traditional method of vinification, others say the results are similar when compared to fermentation in a tank with mechanical crushing. Well, lets specialists debate!

The must was very cold in the beginning, around 53º F, but when we started to move around the lagar, it started to get warmer. The grapes had been harvested that day and they weren’t fermenting yet. In the first 15 minutes, we maintained a military discipline, standing all together in a single file row, patiently moving back and forward. But the “freedom” which traditionally comes approximately 2 hours after treading, for us, came earlier, as directed by the experienced winemaker, Sebastião Mesquita. We started to develop random movements in the lagar, while chatting and complaining about the backaches we started to feel after 20 hours awake. It was a late night, we were very tired but really happy, making wine with our friends while tasting the extraordinary Ports of Quinta das Aranhas, what else could you ask for?!?